I was planning to use LM393 Moisture Sensor for a plant watering system. First I build a small scale setup to test the sensor with unfortunate results. I could call this post:

Soil moisture is a key measurement in driving the plant watering system, therefore I want to monitor it carefully. Originally, I planned to use standard moisture sensors and have bought a bunch of the type shown above.

However, after receiving the sensors I stumbled upon the article Sensing Soil Moisture: You’re Doing it Wrong. I decided to setup an isolated test to verify the claim. My setup was a Raspberry Pi Zero connecting the sensor placed in the soil of a plant to a LED. So continuous monitoring and thus continuous power to the sensor. Below is the chocking result after just one week of operation.

Oxidised and very little material left – I was chocked! And so was the test plant – it died quickly and I suspect the amount of copper deposited in the ground to have something to do with that. To mitigate or at least slow down the oxidisation the sensor could be powered only when sensing. But the oxidising will still happen at some point and the uncertainly of when is undesired in a running system. I followed the suggestion from the article and built sensors from pencils. However, my experience is that these have lower sensitivity and thus difficult to get good results from. 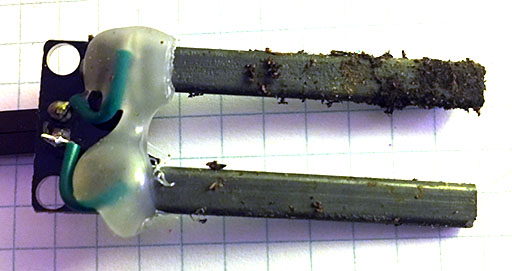